If I could change one thing, it would be meeting Maxim.

The locksmith, a hobbled old man with hunched shoulders and a jaunty cap, nodded in silence as I opened the door. In the late daylight, his shadow stretched into a slender top-hatted thing, spilling a dark pool, protecting me from the sunlight, killing the polish of the marble floor.

His eyes gazed greedily at the stained glass in the tall lancet windows, the sparks of silver, gold and glass that jumped out at us from dark antique surfaces as I led the locksmith across the foyer and upstairs. Dust motes climbed with us as we passed the drawn drapes, and fell upon us from the vaulted ceiling, through the broken chandelier.

“Beautiful house, ma’am,” the locksmith said. “I can see why you want some added security.”

I tried to smile, and failed. “It’s not the house I’m worried about,” I said.

But Maxim could see my worry about the house, my loneliness. My independence left me long untouched, with nary a ghost to keep me company. Family members had long been buried and almost forgotten, only alive in the portraits that ranged the brocade walls. As we passed each rich oil oblong, shimmering with smiles and frowns, Maxim laughed.

“They are nothing now, and you are everything.

“The only thing,” he said, and I agreed.

Maxim enjoyed my dead house and the promises it offered us. He cast the dark curtains across the portraits, took me in his arms. I swooned at the bite on my neck, not knowing what it meant. The pain seared, sizzling down into my heart and up into my brain, confusing both.

“This is the past,” he said, crashing my memories to the floor– Mama’s hope chest, Grandmother’s tapestry that had welcomed a pale, weaker husband to the fold. Diamonds and broaches fell, and my hands were too weak to retrieve them.

The jewels spilled through my frail fingers as Maxim laughed, taking another bite at my neck and beckoning with his hard hand to a cabal I did not know.

We kissed, and he bit my lips, making me bleed, furthering me into his thrall.

Then I felt nothing. The memories fled from my scrapbooks and portraits. I traced my hands across the thick oil swirls of my family portraits, but felt nothing. An image, nothing more.

I heard the locksmith tinkering away, piling lock upon lock on the tower door. “Tight as a drum, I guarantee!” the old man crowed. I sat and truly smiled, waiting, almost secure.

I stared at the dead panels on the wall. Out came a face. A skirt. A suit. A smile. Yet they meant nothing to me, even as they beckoned. Meanwhile Maxim chuckled, taking me into his arms, willing my hands away from my family.

Again, so deeply we kissed, that nothing else existed. “You are mine,”  he breathed. Then I realized he wasn’t like my mother or grandmother, honoring my family, but outside them, not breathing, merely observing. And I was becoming like him.

Memories were a pain, a scene I no longer fit. No honor was left.  I saw tears, bloodshot eyes and mottled faces, and they still meant nothing. Mouths moved on the canvas, but I only heard the pounding of my strengthening heart. Maxim’s ghouls stood in the background, confident that I would join them, now that I had shared his bite.

It was a chance, but I took it. There was no past I could cherish anymore. While he slept next to me in the black canopied bed once promised for my marriage, I killed him. The oaken stake stilled his heart and stained the sheets scarlet. He cared too little to look me in the eyes as he died, merely warning me that his followers would come for me.

I was scared by the thrill I felt plunging the stake into his chest, the victory of breaking the bones and silencing that dark heart. Pleasure was not something I wanted to fear.

I wasn’t so lonely that I needed evil for company.

The locksmith put the final touches on the door, locking me in. I felt the sun setting.

I prayed the locksmith would flee before dark, when Maxim’s undead were bound to return.

My nervous hands held the detonator. I  heard the rush of giant wings, and pictured my house aflame.

Photo by Kelly Sikkema on Unsplash 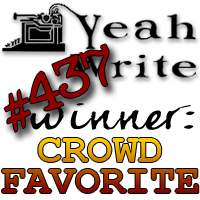 13 thoughts on “Locked Out”